How Dense Are You? Part 2 for Providers

Dennis Holmes, MD, FACS Blog How Dense Are You? Part 2 for Providers 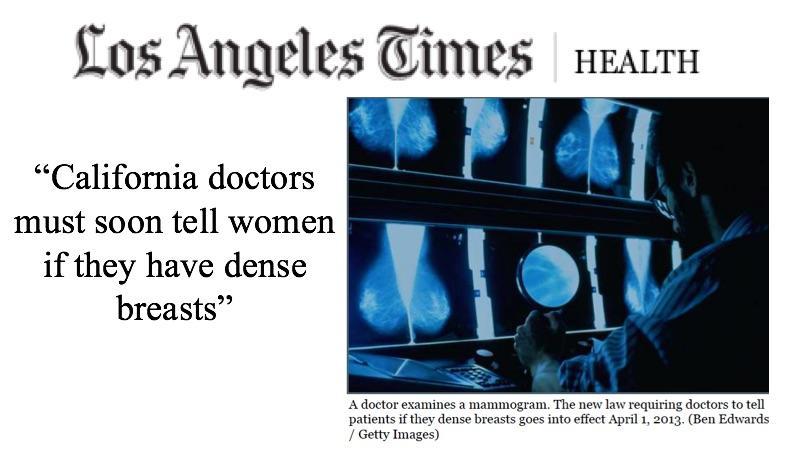 There’s a movement afoot in America. From Maine to Florida, Texas, Oregon, and many states in between, the "Are You Dense?" nationwide campaign led by the breast cancer advocacy movement is making efforts to enact laws that ensure women receive proper education regarding the significance of breast density and its association with an increased risk of breast cancer. Breast density varies considerably among women and can also change with advancing age. For this reason, physicians should inform women undergoing mammograms of their personal level of breast density.

What is breast density and why is it important?

Breast density refers to the relative proportion of the three main contents of the breast: 1) milk-producing glandular tissue and ducts, 2) stroma—the internal scaffolding of the breast that holds everything in place, and 3) fat tissue which serves as a filler to keep the breast soft and pliable. Breasts that have a relatively high proportion of fat tissue are considered “fatty” or “non-dense,” and breasts that have more glandular tissue and stroma are considered “dense.”

Breast density tends to be higher in premenopausal women and in women taking hormone replacement therapy. As women age, the glandular and stromal components of the breast tend to disappear and the fat component tends to predominate. However, some young women have fatty breasts and some elderly women have dense breasts. Breast density patterns also tend to run in families, so women are likely to notice breast densities similar to their mother or sister.

The four levels of breast density that may be detected in mammograms. Levels 3 and 4 should be disclosed to doctors and their patients.

How is breast density measured?

Breast density is divided into 4 levels based upon the amount of glandular tissue and stroma compared to the amount of fatty tissue contained within the breast (See Image Above). 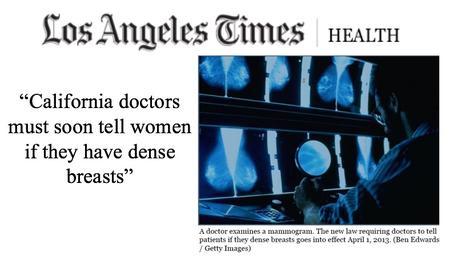 The effort to improve breast cancer detection led California legislators to pass the California Breast Density Law, which requires mammography providers, beginning April 1, 2013, to notify women if they have Level 3 or Level 4 breast density. The law also mandates that women must also be notified that high breast density may increase their risk of breast cancer and that dense breast tissue can make it harder for mammograms to detect cancer.

The Breast Density Law was originally scheduled to expire on January 2019, but legislation (SB-1034) was introduced by Senator Holly J. Mitchell (Los Angeles) to remove the law’s sunset clause before it was ultimately re-enacted by Gov. Jerry Brown, ensuring that the law will stay in effect until January 2025.

Notably, the legislation explicitly states that the law “shall not be deemed to a create a duty of care or other legal obligation” beyond the duty of mammography centers to notify patients and their providers of the hazards of high breast density.  The American College of Obstetricians and Gynecologists does not recommend routine use of supplemental imaging in asymptomatic, average-risk women with dense breasts, touting the lack of proven reduction in breast cancer mortality.  However, “proven survival benefits” might be too high a bar to meet given markedly increased morbidity and quality of life impairment associated with higher stage cancers. Thus, there remains considerable concern among physicians and legal authorities that the law will provide a basis for initiating legal action by breast cancer patients with Level 3 and 4 breast density who fear that their breast cancer diagnoses were delayed by the failure to be notified of their elevated risk and the limitations of mammography. Indeed, multiple law firms now advertise services to dense breast patients who feel that detection of their cancer was delayed.

The Doctors Company identified breast cancer as the number one cause of malpractice litigation in the U.S., with alleged delay in diagnosis and poor physician-patient communication being the leading reasons.  In an effort to minimize litigation, The Doctors Company published a list of 39 ways to avoid getting sued for breast cancer based on cases that it has litigated. Although The Doctors Company’s tips pre-date the national breast density awareness movement, a recurring theme was the failure of providers to adequately work-up breast symptoms in a patient with presumably normal mammograms.

A major shortcoming of the Breast Density Law is that it does not provide guidance on how dense breast patients and their physicians should address the shortcomings of mammography nor require insurance companies to cover the cost of adjunctive breast imaging, creating a dilemma for patients and physicians trying to navigate this conundrum.  To provide an evidence-based rationale to approaching this discussion, the U.S. Preventive Services Task Force (USPTF) conducted a systemic review of supplemental screening for breast cancer in women with dense breasts, which identified screening ultrasound, contrast-enhance breast MRI, and digital breast tomosynthesis (3D mammography) as the most useful adjunctive technologies for screening of women with dense breasts.  For example, for every 1,000 mammographic examinations, adjunctive screening ultrasound was capable of detecting 4.4 additional cancers, MRI 3.5-28.6 additional cancers, and 3D mammography 1.4-2.5 additional cancers. The USPTF recognized the potential for false-positive results and unnecessary biopsies, but acknowledged that there was “insufficient evidence to assess the balance between benefits and harms of adjunctive screening.”

Ultimately, the decision of if and when to incorporate supplemental screening for dense breast patients requires shared decision-making that is guided by the patient’s personal risk of breast cancer assessed most appropriately utilizing the Tyrer-Cuzick or Breast Cancer Surveillance Consortium (BCSC) breast cancer risk assessment tools, each of which incorporates breast density:

Annual digital screening mammography and bilateral screening ultrasound beginning at 35, or 10 years before youngest relative but not before age 30

Annual digital screening mammography beginning at age 30, or 10 years before youngest relative but not before age 30;

Annual bilateral contrast-enhanced breast MRI beginning at 30, or 10 years before youngest relative but not before age 25

One recent development that has complicated the use of annual screening contrast-enhanced MRI in dense breast women is the issue of gadolinium retention in the brain, first reported in 2014. Gadolinium-based contrast agents are essential for MRI imaging of the breasts. Although there is not clinical evidence that directly links gadolinium retention to adverse health conditions in patients with normal renal function, the medical community is beginning to rethink liberal use of breast MRI for high risk screening, particularly for younger women who might otherwise face a long life of yearly screening MRIs.  (Gadolinium is contraindicated in women with renal insufficiency.) Gadolinium deposition is an area of active clinical research and the subject of much patient interest.  However, in the absence of further guidance, providers and patients must participate in shared decision-making to determine if the frequency of breast MRI might be adjusted for an individual patient based on her personal risk and family history of breast cancer, age, and risk-tolerance.

The following considerations must also be given to selecting a patient’s personalized screening regimen:

Ultimately, the art and science of medicine is helping each patient understand her personal breast cancer risk and helping her decide how proactive she wishes regarding breast cancer screening. Hopefully, this article has provided a framework for how you may navigate this shared decision-making process with your patients.